Emily Neimans wrote a rather interesting blog entitled, “Ghana Ups Power Supply So All Can Watch World Cup,” which revealed the lengths to which the Ghanaian government went to provide electrical power to the entire nation for Ghana’s first 2014 FIFA World Cup match against the United States. According to Neimans, electricity in Ghana was rationed prior to the game, causing power shortages throughout the nation.  Furthermore, Neimans reveals that Ghana also bought 50 megawatts from the Cote d’iVoire to ensure that the entire country could watch the first game and subsequent Ghanaian games at this 2014 FIFA World Cup. For a country blessed with the sun and wind, it is a wonder that Ghana continues to have power outage problems.  A recent press release by The New Patriotic Party’s Finance spokesman, Anthony Akoto Osei, at the Ghanaian parliament claimed that the Bui Power Authority is spending $3 million on a golf park and recreational center for its staff at the affluent East Legon area, while the Ghanaian government is rationing out power throughout the country. 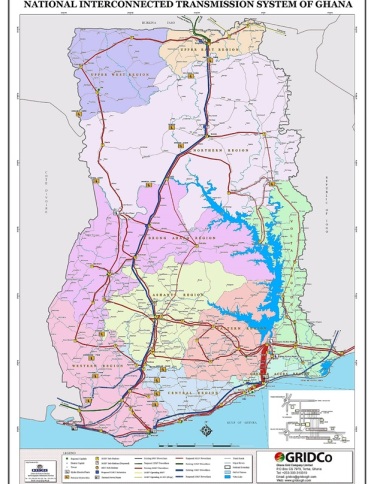 This post is not intended to be a critique or condemnation about power shortages in Ghana. Instead, I would like to look at the ways in which Ghana can overcome its energy problems with the resources it has. When the Akosombo dam was built to generate electricity for Ghana, the Ghanaian population at that time was under ten million, and some of the electricity was even sold to Burkina Faso for a profit. Now, approximately fifty years later, the Ghanaian population has almost tripled and the Ghanaian government is now purchasing gas from outside the nation’s borders. This shift over the last fifty years is problematic, yet it is also provides the state with an opportunity to shape the next fifty years of Ghana’s development.

In this developmental future, it is clear that there needs to be shift from a singular source of power and/or from foreign energy sources of dependency as Ghana now receives part of its electricity from channels outside Ghana. Indeed, there needs to be a revamp of the nation’s electric grid, as the country now uses far more energy than it once did.  Furthermore, this revamp should not only be focused in Accra, Kumasi, or other big cities, but should be accomplished across the entire country. When constructing and reconstructing the electronic grids, I urge the Ghanaian government to also build internet cables throughout the country. While I know these will be a huge cost for the government to undertake, these costs should be viewed as an investment rather than an expenditure. By providing solid and reliable power grids, and free internet connectivity, the nation’s faltering economy is sure substantially improve as it will provide individuals with a means to use their creative talents to enhance productivity and entrepreneurship.

But, as a recent article entitled, “Aboadze T3 plant won’t work; gods there are angry – chief reveals,” has revealed, it is important that the government take into account local customs and practices in this effort. For instance, in an effort to (re)-build the T3 power plant in Aboadze, the government supposedly failed to consult the local chief, Nana Kwabena Attom. According to chief Nana Kwabena Attom, the government just came to Aboadze and started building without consulting the people. Furthermore, they interpreted this as a sign of disrespect for their culture and thus claimed that, because of this disrespect, the plant continues to suffer malfunctions.

To re-energize Ghana’s economy, the government needs to revamp its energy strategy. It needs to fix and build new internet and power lines; it needs to re-open, utilize, and maximize its nuclear reactor (with security checks of course); it needs to utilize its natural resources of wind and solar to make the nation energy independent and stable. But, in doing all this, the Ghanaian government needs to spend the money wisely, it needs to follow local customs and practices such that there is no ill-will amongst the people it is trying to help.

K.N. Osei-Opare is a PhD student in History at the University of California, Los Angeles (UCLA). He received his Bachelors and Masters degrees in History from Stanford University.  He is interested in state capitalism, modernization, intellectual networks, Nkrumaism, and African philosophy.   He is also an avid cricket, football, and Manchester United supporter.

One thought on “Securing Ghanaian Economic and Energy Independence and Prosperity”

What do you think? Cancel reply

© The Africa Collective, 2014. Content from this blog may be used or reproduced elsewhere, provided that full and clear credit is given to the author and the Africa Collective with appropriate and specific direction to the original content. Unauthorized use and/or duplication of this material without express and written permission from this blog’s authors and contributors is strictly prohibited.
%d bloggers like this: